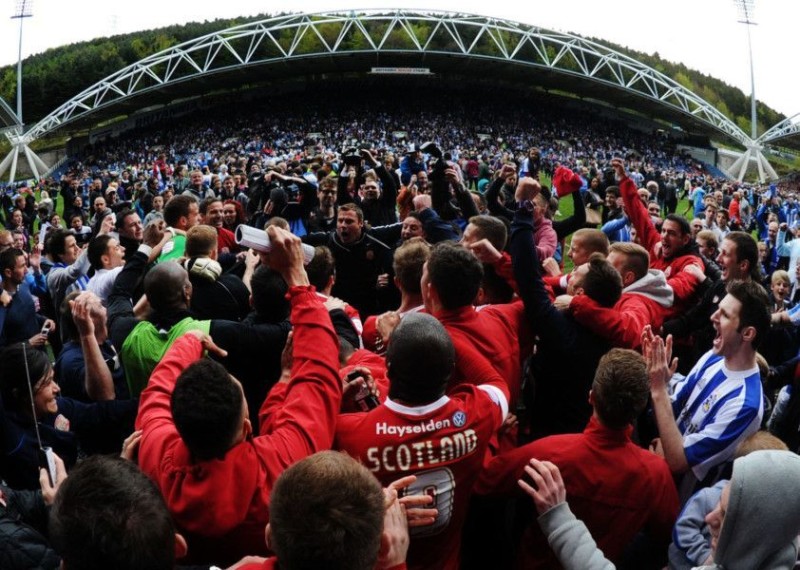 Some of the heroes of Barnsley’s 2013 ‘great escape’ believe last week’s survival was even greater.

The Reds came from nine points adrift, two more than seven years previously under David Flitcroft, to survive on the final day of the season with a 2-1 success at Brentford last Wednesday. Although there was nothing like the pitch invasion from Barnsley and Huddersfield Town fans, after Luke Steele kept the ball at his feet in the final minutes to ensure a 2-2 draw that meant they both stayed up, Gerhard Struber’s side netted injury-time winners in their last two matches to survive after 311 days in the bottom three.

Jim O’Brien played at Huddersfield and, having lived in Barnsley for more than a decade, considers himself a Reds fan. He told the Chronicle: “I think this one was probably better than what we did in 2013, considering where they were and how much they jumped up in the space of a week. It was incredible.

“The players will say it’s one of the best things they have ever done. Still to this day, with what we achieved on the budget we had, it was one of the best things I have experienced in football. The biggest similarity between the two teams is the workrate and the attitude. It was drilled into us when we were going for it that we could save people’s jobs by keeping the club up. That is probably even more so now as the club has lost a lot of money with no supporters coming through the door.”

Stephen Foster played 244 games in a six-year Oakwell spell which ended after the Huddersfield game. He said: “I would like to pass my congratulations on to everyone involved. Having experienced something like that, I know you remember it for a long time. I have seen some people say you shouldn’t celebrate staying up but, for a team like Barnsley with their budget, it’s a big achievement – especially considering where they were a few months back.

"People’s jobs will have been saved by that, and it was a hell of a way to finish the season. It was a similar moment to 2013 but I don’t think you can beat this one. When you compare the two squads, this one is much younger and they have done it without as much experience and leadership.”

The Reds finished outside the bottom three due to a 12-point deduction for Wigan Athletic who went into administration. Foster said: “I have every sympathy for the Wigan players and their manager Paul Cook. But it’s not Barnsley’s fault. They had a job to do and they did it. You can’t take anything away from what they did. The only shame is that the fans weren’t there.”

O’Brien has been working part-time at the Oakwell academy, with the aim of becoming a coach in the future, while he is still playing for Notts County who are in the National League play-off final on Sunday at Wembley against Harrogate Town. He enjoyed following the Reds’ final games of the season from his home in Wombwell and hopes they can build on the survival in the way his 2013 side were not able to as they were relegated a year later.

“It was brilliant. I watched most of their games after the lockdown, including Brentford. Bar the Stoke game, I think they were brilliant. It was really exciting to watch as a fan. I’ll be honest, with three games to go, I didn’t fancy them because I thought they had too much to do. To get it over the line was incredible.  “It just shows the attitude they have to keep going until the end. It wasn’t good for the blood pressure but I am really glad they did it.

“Hopefully they take that into next season now.  As a supporter, even though it might be the wrong time to talk about investment, I think if they have a real go in the transfer window they could make sure they are not fighting relegation every year. I think the team needs a bit more experience. I know the business plan is to sign players of a certain age but you can’t put a price on experience. You have seen it from the centre half they signed in January (Michael Sollbauer).  When the going gets tough, the experienced lads can see you through.”