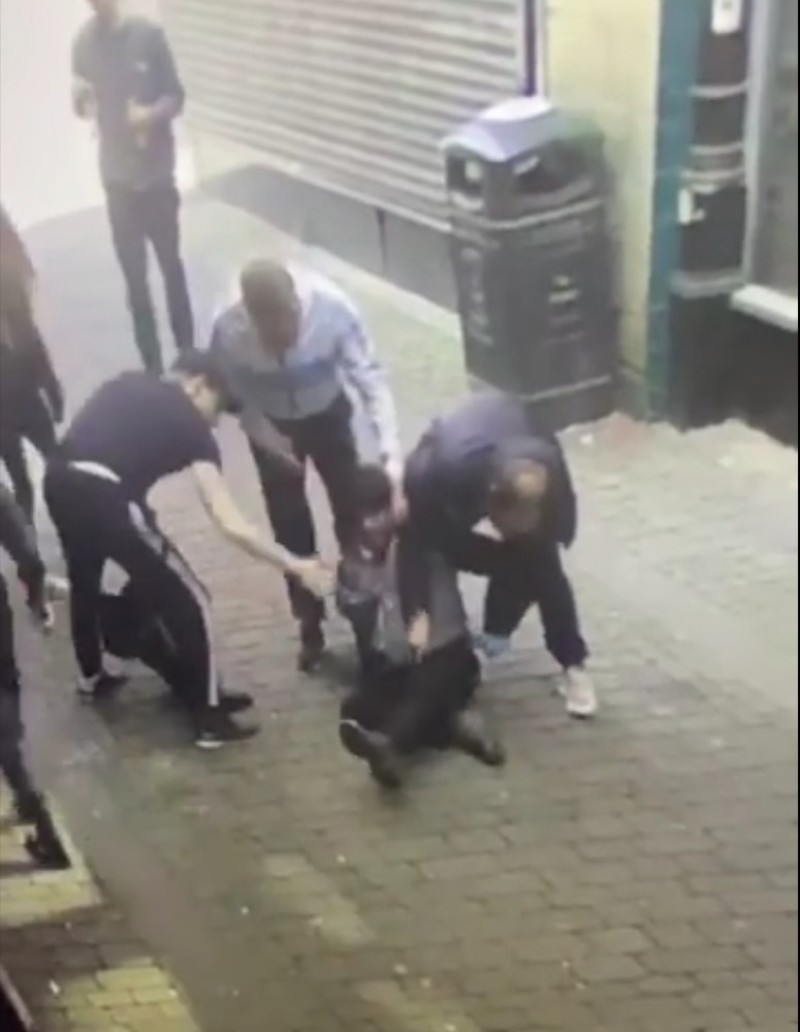 FOUR people have been sentenced to a total of more than 14 years in custody after pleading guilty to robbing a man in Barnsley town centre on VE Day.

Kieron Yates, 19, James Upton, 25, Ryan Houlston, 34, and Jodie Heppenstall, 21, were jailed following the incident in The Arcade on May 8.

Victim Rajitkumar Sothilingham, who moved to the town from Sri Lanka two years ago, was walking in the usually-busy area, just off Market Hill, when he was attacked.

Shocking CCTV footage showed the 41-year-old being pulled to the ground by his neck before being punched and kicked repeatedly as other members of the gang stole his phone and a packet of cigarettes he was carrying.

The attack was captured on CCTV and was quickly shared to social media where it gained attention and caused outrage among the public.

All pleaded guilty to robbery and Heppenstall was also charged with common assault, when they appeared at Sheffield Crown Court last Thursday.

“The victim endured an extremely distressing and entirely unprovoked ordeal, all for a mobile phone and a packet of cigarettes.

“I’m very pleased with today’s result, and for getting justice for the completely innocent victim.

“I hope it shows that such horrendous behaviour will not be tolerated in our community.

“The actions of Yates, Upton, Houlston and Heppenstall that day left local residents, and people across the country, horrified and I’m glad they have all quite rightly been handed custodial sentences.”

According to latest figures obtained by the Chronicle, 3,126 hate crimes and related incidents were reported to South Yorkshire Police in 2019 - nearly 200 more than the year before.

Chief Superintendent Sarah Poolman, who is Barnsley’s district commander and also the force’s lead for tackling hate crime, said: “This will not be tolerated and as a force we are continuing to work hard to build confidence within our communities to report these crimes and support those who have been subjected to it.

“In some communities we know that hate crimes are still under-reported which is why, alongside key partner organisations, we are doing a lot of educational work to raise awareness of what a hate crime is and how to report it.

“We know it takes a great deal of courage to report a crime and we want to reassure our residents that we always listen to victims, take all allegations seriously and investigate all hate crimes thoroughly and I would strongly encourage people to report incidents to us.

“Within the force we have dedicated hate crime co-ordinators in every district who actively engage with community support groups and victims to build confidence and resilience at a local level.

“All hate crimes are reviewed in order to achieve positive outcomes for victims, and we also regularly seek feedback from victims and community groups through our surveys and local hate crime scrutiny panels to constantly assess and improve the way we do things.”