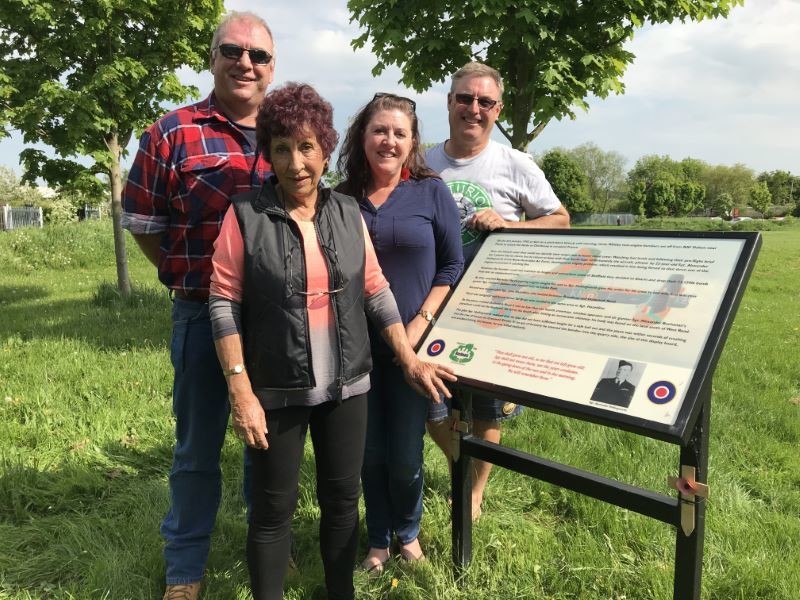 AN AUSTRALIAN family were met by a large welcome party when they came to Barnsley this week to lay a wreath at the site of the air crash in which their relative died.

Sgt Alexander Hollingworth, of the Australian Air Force, deliberately crashed his Whitley bomber into a quarry off Cresswell Street on January 6 1942.

Lex, as he was known to friends and family, had already dropped his bombs over un-populated areas as the plane burned, and he allowed the rest of his men to parachute out - three of them to safety, but Canadian Sgt Alexander Buchanan had left it too late to bail out and was killed after striking a chimney near Dodworth Road.

But knowing the plane was going to crash somewhere over Pogmoor, Lex stayed with the craft and ploughed it into the quarry.

He was killed instantly, and the windows were blown out of the surrounding houses, but he saved the lives of all those on the ground. As a result there are people alive in Pogmoor today who might never have been born if not for his bravery.

Relatives of Sgt Hollingworth contacted the Chronicle last month in the hope they could be put in touch with the organisers of the remembrance service which takes place on the site every year ahead of their planned three-week trip across Europe.

On Wednesday, members of Pogmoor Area Residents’ Association, the Royal British Legion and the Royal Air Forces Association formed a welcoming party for the four relatives.

Kathy Roberts, 73, whose father was second cousin to Lex, was deeply moved to attend the site with her son, daughter and son-in-law.

“I feel like I’m part of him,” said Kathy, who was born three years after the crash.

“I feel like I know him, my father would always talk about him, and being here I can really feel that connection. I feel so close to him.

“I think it’s absolutely wonderful that he is remembered and honoured here in Pogmoor, I really do. It’s just wonderful.”

An information board explaining what happened stands in the field where the crash happened, and there is a memorial set into the brickwork of houses across the road.

Kathy’s daughter Jacki, 51, said: “I was given a locket when I was 21, it carried two pictures, one of my grandfather, and one of Lex.

“To bring my mum here to see all this, to see how he’s remembered, is just fantastic.”

Brother Brent added: “The name lives on in our family. My boy’s name is Alexander, he’s four.

“It’s really important to never forget the sacrifices made by that generation, so the younger generation remembers and so that things like this never have to happen again.”

The family said they were honoured to have received such a welcome, and were thrilled that every year the community in Pogmoor holds a ceremony of remembrance on January 6 to commemorate the crash.

Vice chairman of the residents’ association, Tom Parnham, told the family: “He had the presence of mind, at 22, to drop his bombs over an un-populated area. If he hadn’t, and crashed with all those bombs, Pogmoor would have been a crater in the ground.”

President of the Royal Air Forces Association Bill McGuinness said: “It makes me weep every time I attend this place on January 6 each year. That a young man at just 22 could do what he did, it honestly makes me weep.

“If anyone deserves a posthumous Freedom of the Borough of Barnsley, it’s Sgt Hollingworth.”