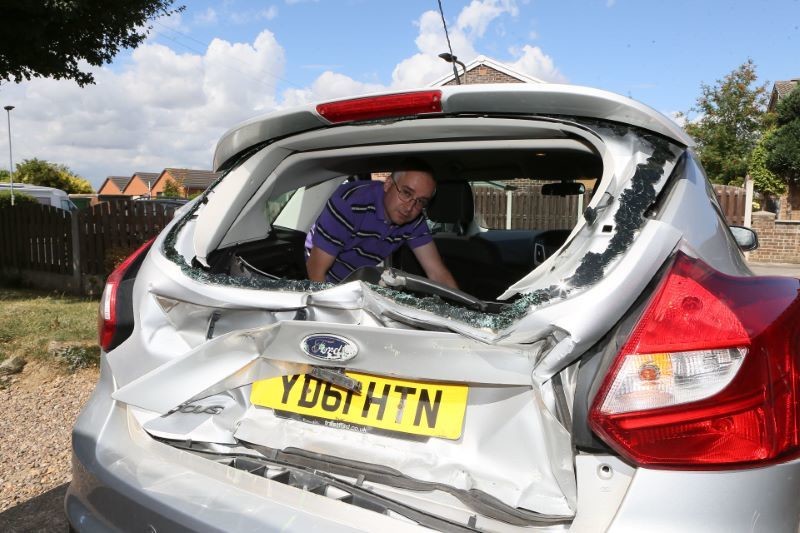 A MOTORIST had a lucky escape after a tractor Â being driven by a young man apparently chatting on a mobile phone ploughed into the back of him and then drove off.

Tony Michael was on his way to work, queuing on Dodworth Road to get on the motorway when the tractor smashed into him on Wednesday morning.

The force of the impact shunted his car into the car in front.

Tony, 45, of Topcliffe Road, Monk Bretton, got out of his car to swap details with the tractor driver, who he had one hand on the steering wheel and his mobile phone in the other.

But the driver, who Tony said looked about 18, swerved around his car and then drove off.

It is not known in which direction he went after leaving Dodworth Road.

Tony had encountered the tractor shortly beforehand when it cut him up on the Alhambra roundabout. Tony managed to drive around the tractor and went on his way.

He said: “I had no idea the tractor was behind me until it happened. I thought I had left him chugging away. I was amazed he had caught me up from the Alhambra roundabout.

“The car is a right mess. The tractor was so high it hasn’t even damaged the bumper but it’s completely smashed the back end and the back window.

“I got out of the car and realised it was the same tractor and shouted at him (the driver).

“He never said anything, he just looked like a gormless idiot. He had his mobile phone in his hand and I think he thought ‘I’m not sticking around’ and drove off.

“He was shifting, he must have been doing the speed limit.”

Tony called the police who advised him to move his car as he was blocking the road, and that the council would clear away any debris.

Tony went home and his car was taken away by his insurance company.

He is now warning others to be vigilant on the roads, and to keep an eye out for the large green tractor which he described as like the Incredible Hulk.

He said: “It’s absolutely shocking that someone could drive in such a dangerous manner with no regard for anyone else on the road.

“If there had have been a pedestrian, it would have wiped them out.

“I just think it might help if someone sees this and for other people to be aware.

“He shouldn’t have been on his mobile phone while driving, but you see so many people doing it.”