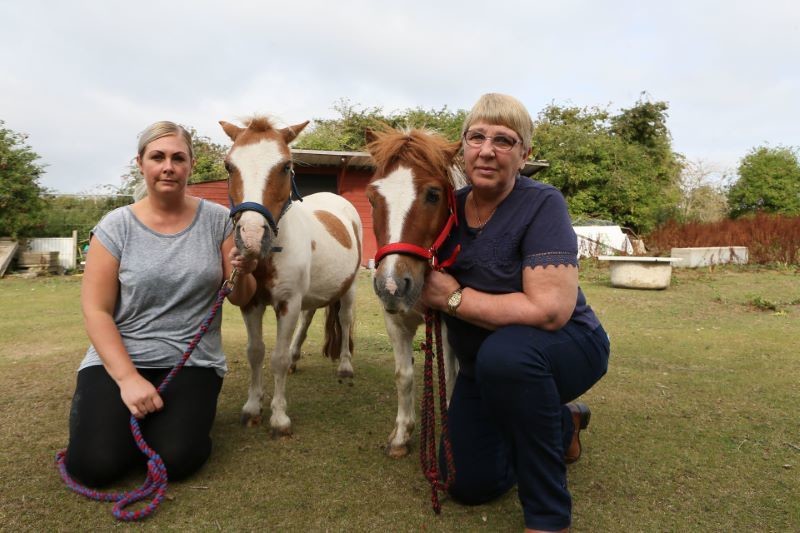 TWO Shetland ponies have been left bloodied and traumatised in a suspected dog attack just months after a similar attack on one of the pair.

Janet Mansell said the dog she believes attacked the two animals needs to be caught and stopped as other animals or even children could be at risk.

The ponies, Diesel, aged 16 and Levi, 18, were both discovered bleeding and clearly in pain and distress on Saturday afternoon.

They were both attacked some time between Friday tea time and Saturday tea-time in their field off Littleworth Lane, Monk Bretton.

Diesel, who was attacked last November in the same field, this time suffered severe injuries to his face.

Levi was even more seriously hurt with injuries to both his face and legs.

“My daughter and grandson went to see them on Saturday tea-time and found them both covered in blood,” said Janet, 62, of Parish Way, Monk Bretton.

“It was horrible, they were both in a bad way and in a lot of pain.

“We had a vet out, they’ve got several puncture wounds, and obviously they can’t wear dressings.

“It’s just a case of trying to keep it all clean so they don't get infected, and they’re both on medication now.”

Janet is hopeful both animals will make a full recovery. The attack has been reported to police and Janet convinced a dog is responsible.

“It’s our field but there are footpaths at the side, and a lot of people walk dogs in that area. Hopefully, someone has seen something.

“The same thing happened last November. It was just Diesel who was hurt last time.

“We don’t know if it’s the same dog or not, but either way, if a dog’s got the taste for blood, it could get hold of a child. It needs stopping.”

The attack was similar to that last year on Levi in that on both occasions, someone is likely to have seen it happen, but has chosen to leave the horses to suffer without going to their aid or raising the alarm with anyone.

Janet and the family are appealing for the public to help identify the dog and more importantly the owner responsible for the attacks.

“It’s not a nice thing for anyone to see, but for my grandson it was really upsetting. He’s only ten and he’s grown up with them both.

“We’ve had Levi since he was a foal.”

A spokesman for South Yorkshire Police said: “At around 11.15am on Monday, it was reported that two horses in a field to the back of Littleworth Lane, Barnsley, had been injured.

“Anyone who saw what happened, or who has any information is asked to call 101 quoting incident 353 of August 13.”