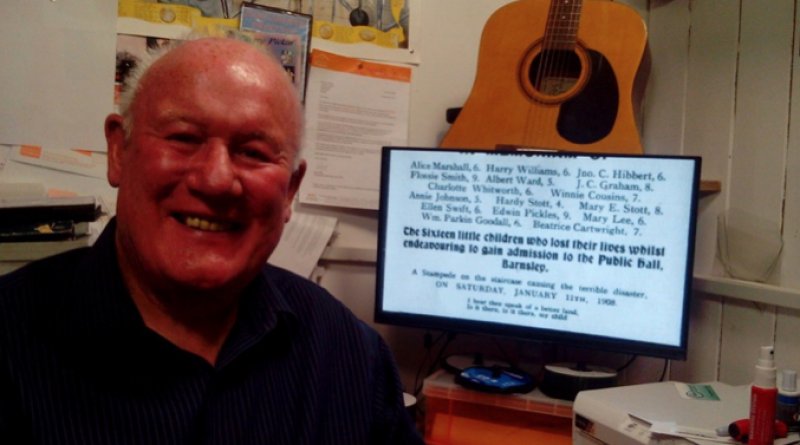 A TRAGIC story in danger of being lost to the history books has been brought into the present by a Barnsley documentarian’s latest film.

Musician and filmmaker Dave Cherry spent six months researching the Barnsley Public Hall disaster in which 16 children – aged four to nine – were killed in a crush on the staircase of the building, now the site of The Civic.

Dave was shocked to find an inquest held in the wake of the incident settled on a verdict of negligence – not criminal negligence, as he believes would be the case today.

He openly questions the verdict and explores conspiracies surrounding the disaster.

“My own mother, who was born just two years before in 1906, always said it was a false fire alarm and the doors at the bottom were ‘spragged’ with a chair.

“This simply was not true.

“It was a series of unfortunate human errors that caused the incident.

“The external staircase, at the side, leading up to the gallery was removed in the 1970s, but it is easy to imagine the appalling carnage that happened on that cold January day in 1908.”

There were several hundred youths in the hall that afternoon, as the World’s Animated Picture Company put on a special children’s matinee, and many of these had squeezed into a gallery on the hall’s upper floor.

It was common for seats, sold for a penny, to be taken by more than one child – but an attendant, seeing the gallery was packed, began to turn children back down the stairs.

Numerous possible contributing factors have been put forward for the incident – which also saw 40 injured children taken to Beckett Hospital – with the several flights of stairs making it impossible for the sole attendant to see those children continuing to rush up to the gallery.

Whether show organisers deliberately over-sold the event, and their bypassing of the usual payment desk at the bottom of the stairs in favour of taking pennies at the top, were also discussed at a public inquest held at Barnsley Town Hall only six days after the event.

Dave, who’d planned on filming in The Civic before coronavirus meant it was inaccessible, also traced five of the children’s graves.

“Two of the children lived on Tower Street,” he said.

“Flossie May Smith, who was eight, lived at 37 and Charles Hibbert, who was five, at 47.

“They were buried on the Tuesday following the accident.

“Flossie’s grave is sculptured with fascinating blacksmiths equipment but it is sadly broken on the floor. Her father was a blacksmith at a local colliery.

“Winnie Cousins was seven and lived at 6 Sovereign Yard near to the town hall, where the library was and where the college is today.

“Charlotte Norton was six and lived at 17 Cope Street whilst Annie Johnson at the age of 4 lived a stone’s throw away at Commercial Street.

“The houses are still there today.

“All the graves are marked ‘accidental’ death following the verdict of the coroner’s inquest.

“It was if they couldn’t wait to paper over the dreadful incident.”