MacDonald own goal in loss at Norwich 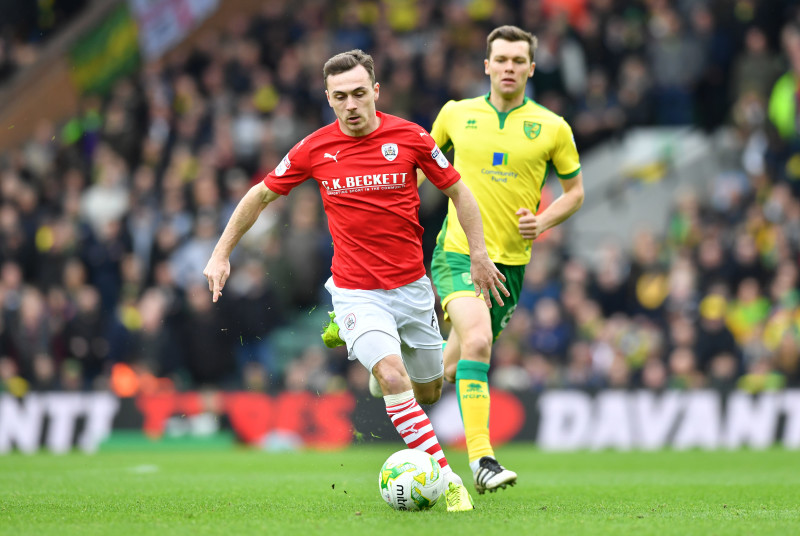 Barnsley lost 2-0 at Norwich City and have now lost just one in their last ten minutes.

Tom Bradshaw had a goal ruled out in the first half before Jacob Murphy made it 1-0 to the hosts at half-time. The Reds missed a host of chances early in the second half before an own goal from Angus MacDonald secure the home win.

Barnsley remain 11th in the Championship table, 11 points off the play-off places and 11 clear of the relegation zone.

Paul Heckingbottom, on his return to his former club, kept the same team that drew 1-1 with Norwich's rivals Ipswich a week previously.    The only change was on the bench where Saidy Janko replaced Ryan Williams.

Barnsley had the first opportunity of the match as Marley Watkins' low shot from 20 yards was pushed out of the bottom corner by home goalkeeper Michael McGovern. Jonny Howson shot wide for City from 20 yards then both he and Alex Pritchard had long-range efforts easily saved by Reds goalkeeper Adam Davies.

Barnsley were saved by the linesman's flag after Andy Yiadom and Adam Hammill both slipped in rainy conditions then Davies spilled a central shot by Ivo Pinto with the rebound about to be tucked away by Jacob Murphy but he was ruled offside. It was then the Reds' turn to have a goal disallowed for offside as Bradshaw was devastated to the see the flag go up after he turned the ball in from the right side of the box following a Hammill cross and flick by Watkins.

The impressive Hammill came close from 30 yards then floated in a free-kick which was headed on by Roberts and over by Bradshaw.
But it was the visitors who opened the scoring when Jerome was allowed to advance down the left wing then pull the ball back to Murphy who found the bottom left corner of the box from 12 yards out.

Barnsley were much better after the break and created numerous chances before the hour. Just 25 seconds into the second half, McGovern made a superb save after Hammill's backheel flick from a pull-back by Yiadom who had burst into the home box.

From the resulting Hammill corner, MacDonald forced McGovern into another save at his near post. Watkins then missed fine chances as he headed over Hammill's free-kick then blazed over the bar after going clean through following a mistake by Russell Martin.

Norwich almost doubled the lead against the run of play but substitute Steven Naismith blazed over from just inside the box. The hosts eventually made it 2-0 when MacDonald diverted the ball back into his own net after Davies had made fine saves from Naismith and then Murphy.

The hosts also got a third when Jerome went through on goal but Davies made a superb save down to his left. Substitute Ryan Kent came close to pulling one back for the visitors but blazed over after good work from Matty James then fired wide following an impressive run and cross from fellow replacement Ryan Hedges.

MacDonald atoned for his own goal with a superb header off the line after Howson almost finished off an incisive passing move.