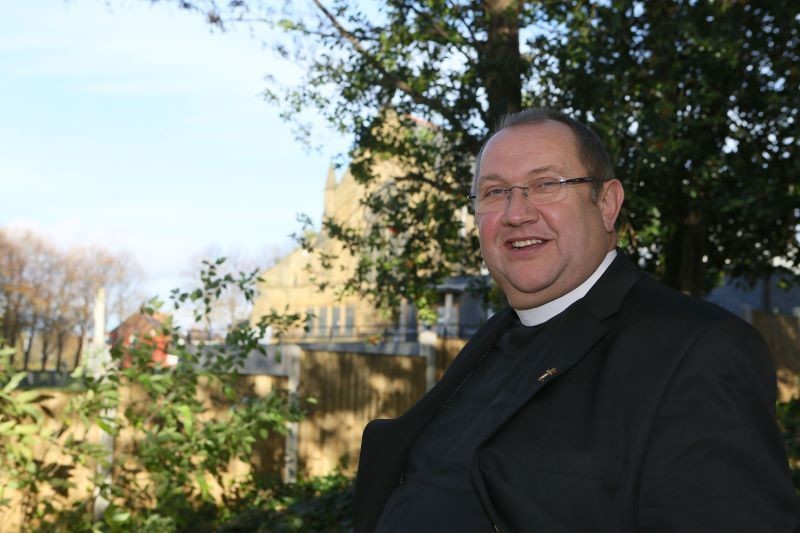 FATHER David Nicholson might be celebrating 20 years at St John’s Church in Cudworth - but he has no plans to move from the place he now calls home.

Having taken over on October 12, 1997, the popular figure has baptised more than 1,000 children and married 200 couples during his tenure - a time he says are the happiest years of his life.

Born in Birstall, West Yorkshire, the 60-year-old served in Wales before heading to Cudworth to be closer to his parents.

“The rest is history,” he said. “I miss the forest walks in Wales but Cudworth has become my home - it’s like a comfy pair of slippers.

“South Yorkshire was very different to West Yorkshire at first. People used to say things like ‘cocker spadge’ and I had no idea what they were talking about. Cudworth is a much-changed place to what it was 20 years ago - it’s grown and it’s still growing - but I love its ordinariness.”

Its three schools - Birkwood, Cherry Dale and Churchfield - are primaries which Fr David has spent a lot of time at, serving on each school’s board of governors, all of which he says are a credit to the village, while he spearheaded a campaign to start a food bank in the village in 2013.

“We open every Friday morning and Friday afternoon at the Centre of Excellence and have fed around 4,000 people in a four-year period,” he said. “I felt like there was a big need for it. Schools gave me some information and it got me thinking about youngsters and their families.

“They have hot meals while they’re in school, but what about the six-week summer holidays? I’m extremely proud of the food bank as although it’s borne out of tough circumstances.”

As well as the food bank, Fr David has overseen the extension at St John’s Church, which was completed in 2013, as well as being appointed as Chaplain to the Queen a year later.

“Both were stand-out points,” he said. “The extension has been a wonderful addition as it’s enabled us to host multiple community clubs such as the brownies, a youth group and ladies’ get-togethers to name a few. We have had so many Christmas dinners in there over the years.

“Being Chaplain to the Queen is a huge honour as Her Majesty chooses those who serve. I was at mass one morning, came back home and answered a call from the Bishop of Guildford, who said my name had been put forward.

“He asked if I needed any time to think about it but I accepted within two seconds. It’s not just a personal achievement for me, it’s for the whole village and I always mention Cudworth when I have preached as places such as St James’s Palace.

“I have absolutely no desire to leave the village as I still have work to do.

“I’m not everyone’s cup of tea but I adore everyone who I serve and the people who come into church. Cudworth’s schools have recently put on assemblies for me for the anniversary, which also coincided with my 60th birthday, and they were all magical, humbling experiences.

“The truth is people never really know what impact they have had until they die, but those assemblies showed I don’t waste my time by going into schools and have touched kids’ and other people’s lives.”