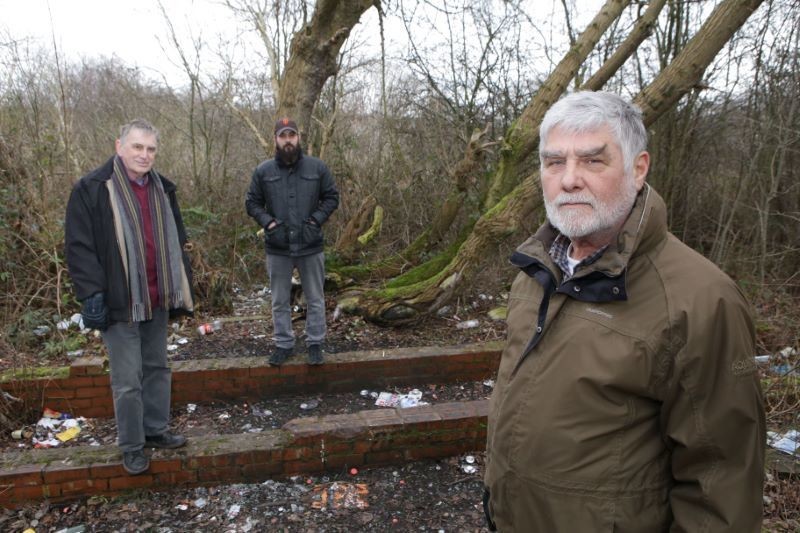 A HAVEN for boozing, drugs and antisocial behaviour could be turned into a peaceful country park if ambitious volunteers have their way.

A strip of wood and grassland that stretches between the back of Asda on Old Mill Lane and the former Fleets pub on Smithies Lane has become a hotspot for people gathering to take drugs, get drunk and generally cause a nuisance - smashing bottles, burning bins and using stolen shopping trolleys as home-made barbecues.

But residents living nearby are hoping to reclaim the wasteland from yobs and turn it into a country park with the help of the Yorkshire Wildlife Trust and a local councillor.

Luke Holmes, 33, is a member of the local ward alliance and a Honeywell resident spearheading the campaign alongside Coun Phil Lofts.

The hope is by tidying up the land - which is owned by Barnsley College, Asda and the council - and encouraging more people to use, it will eventually deter the bad behaviour.

Luke, who got involved after doing a litter pick in summer where he found some 500 syringes piled up at the edge of pathways, is hoping to set up a formal group to lead on the work.

At the moment the clean up operation is reliant on local volunteers and help from the Twiggs environmental team but they’ve already made significant progress by bagging up broken glass, clearing up drug paraphernalia and taming overgrown trees and shrubs.

“It’s a bit of a wasteland and has been left in a state of disrepair,” said Luke.

“On Friday and Saturday nights kids are using local shops to buy alcohol and going down there, nicking bins and setting them on fire and setting trolleys on fire.

“The amount of smashed glass down there is about an inch-and-a-half thick.

“We did one path and it took us four hours with eight of us to clear it.

“Because less and less people are going down there it is creating honey pot for antisocial behaviour.

“There’s kids coming from all over - from Worsbrough, Cudworth. They’re congregating down there before matches at Oakwell now as well. There were about 35 down there the other week.”

Coun Phil Loft said residents are making attempts to do something positive to eradicate the nuisance behaviour and he’s hoping to secure council funding to kick off development of turning it into a ‘proper country park’.

He said: “We’ve had several meeting with planning and the S106 (cash set aside by developers to benefit the community as part of planning permission) officers, legal officers and biodiversity, and Yorkshire Wildlife Trust are interested in developing that site.

“We are hoping in the not too distant future that Yorkshire Wildlife Trust will be applying for money to pay for a part-time officer to develop that site as a wildlife haven.”

Initial ideas are that a grass strip at the side of the canal path would be transformed into a wildlife meadow and a plot near the Fleets end of the land would be turned a community orchard.

The next clean up event is on Wednesday, February 21 meeting on the site at 10am.