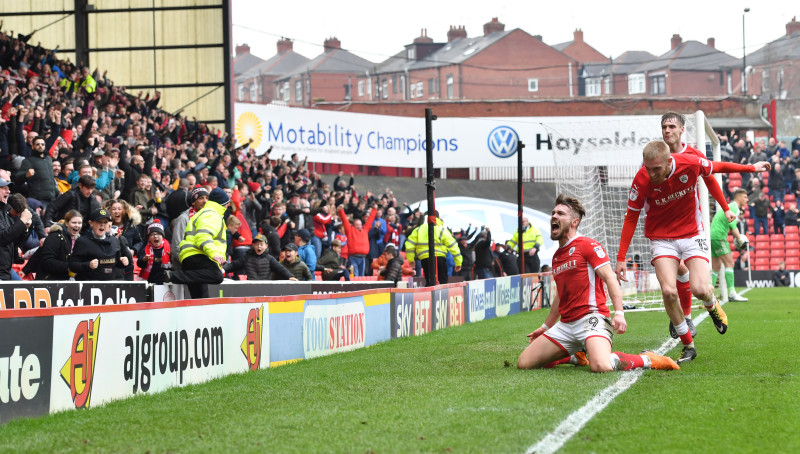 Gary Gardner's superb first goal for the club put the Reds 1-0 up at the break but the promotion-chasing Blades netted twice in eight second half minutes to take the lead. Oliver McBurnie levelled with 15 minutes to play then Bradshaw headed in the winner in the 88th minute.

The Reds are still in the relegation zone but are now just two points adrift of safety and, although the sides above them could increase that gap this afternoon, Barnsley will still have a game in hand.

Head coach Jose Morais kept exactly the same team which drew 2-2 with Bristol City eight days earlier. Dimitri Cavare - after a training ground 'fight' with Nick Townsend – returned to the bench along with Stevie Mallan while Jason McCarthy and Joe Williams were left out.

Barnsley began the game very well with Kieffer Moore heading wide from a corner by George Moncur who then hit the bar with a dipping 15-yard effort from the right of the box following a short corner routine.

United came back into the match and should have taken the lead but John Lundstram blazed well over from five yards out after an excellent move which saw him exchange passes with several of his team-mates.

Both sides had several long-range efforts which failed to trouble either goalkeeper, until the 25th minute when Gardner showed them all how it was done with a superb 25-yard strike into the top right corner after Moncur's low corner was cleared. It was his first goal since he netted for parent club Aston Villa in another local derby, against Birmingham City last season.

United manager Chris Wilder brought on Billy Sharp for midfielder Lee Evans after 39 minutes and Sharp had a fine chance to level when he met Chris Basham's low right-wing cross six yards out but his effort appeared to be blocked by Adam Davies then went up into the air and was cleared.

Moore almost made it 2-0 when he went clean through early in the second half but his namesake Simon Moore rushed off his line to make a good block on the edge of the box then the striker's follow-up shot was blocked on the line.

The Reds then outnumbered the visiting defence on a counter-attack but Lloyd Isgrove's pass was just behind Moncur whose eventual shot was saved by Moore easily diving down to his left.

United levelled on 57 minutes when John Fleck received the ball from Leon Clarke on the edge of the box, skipped past a defender and smashed a low shot from 15 yards into the bottom left corner.

It was 2-1 to the visitors eight minutes later when Gardner lost the ball and Clarke went clean through. Davies made a good save but could only weakly kick the follow-up shot away and Clarke smashed into the top left corner from six yards.

United looked like they were going to add to their tally but instead it was the hosts who levelled when substitute Adam Hammill cut in from the left and had a low shot which Simon Moore parried then McBurnie tapped in from two yards out.

United had some glorious chances to go 3-2 up. Enda Stevens fired across goal from the left of the box after Fleck passed through the legs of Hammill, then Davies made a superb reaction save from a Clarke header before Sharp put the rebound into the side netting.

But it was the Reds who won it when Bradshaw headed in a Moore's right-wing cross at the back post. Sharp nearly made it 3-3 in injury-time but blazed over the bar after some good passes in the Barnsley box.