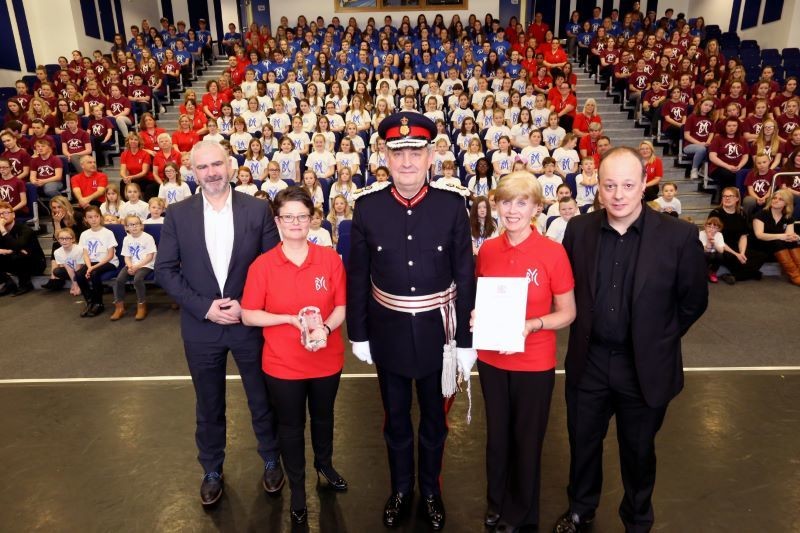 BARNSLEY Youth Choir members were formally presented with the Queen’s Award for Voluntary Service informally known as the MBE for volunteer groups at their rehearsal last Thursday.

Lord Lieutenant of South Yorkshire Andrew Coombe made the presentation as the Queen’s representative in the county.

Musical director Mat Wright said: “It was a really lovely evening. It was a very formal occasion, but the Lord Lieutenant was really great with the kids. Lots of them very very excited.

“We had more than 350 children there, and the amazing thing was that for more than 40 of them, it was their first rehearsal with the choir. It was quite a start for them.”

The award recognises the achievements of the choir, both in terms of competition success and the wider success in developing music among Barnsley’s young people, but it particularly recognises the volunteers behind the scenes who allow it to run.

“We have nearly 90 volunteers, which is an incredible number and they really do give an incredible amount of time to the choir,” said Mat.

“But it isn’t just about the volunteers we have now, it’s about all those who have given their time over the nine years since we formed.

“We’re coming towards our tenth anniversary, and to receive this award as we approach that milestone is a huge honour for all involved in the choir.”

Up to 200 people are estimated to have been choir volunteers since the formation of the choir. Many leave when their children leave the choir, but some have continued as volunteers long after their children have left often to go to university.