Reds' poor away form continues with loss at Wycombe 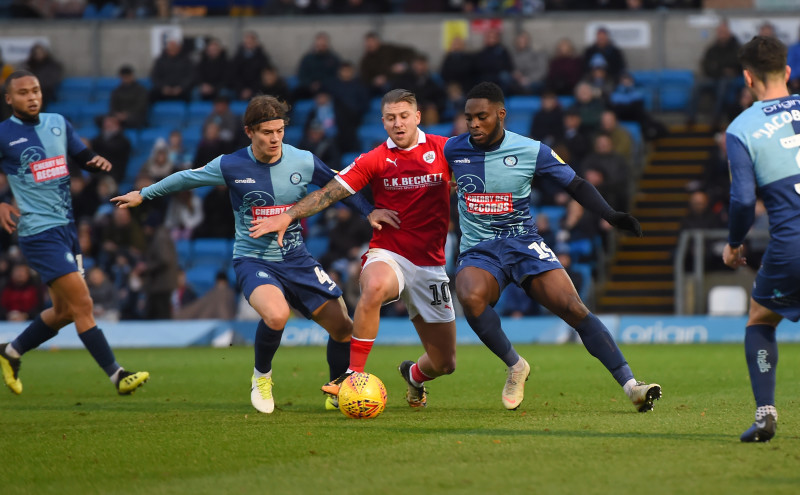 Barnsley suffered a fourth defeat in five away league games as they went down 1-0 at Wycombe Wanderers’ Adams Park on Saturday.

The hosts scored early in the second half to record a club record sixth successive home league win and move to within four points of their visitors.

The Reds are still fifth but are now six points behind second-placed Sunderland and 12 off leaders Portsmouth who visit Oakwell on Saturday.

Barnsley are only a point above eighth and will need to improve on this lacklustre display if they are to avoid slipping into mid-table during a run of difficult games during the festive period against sides in the promotion hunt.

Head coach Daniel Stendel kept the same team which won 4-2 a week earlier in the FA Cup at Southend United, with Lloyd Isgrove returning to the bench following injury and illness.

The Reds had plenty of the ball early on but all they had to show for it was a 25-yard yard Alex Mowatt shot which was straight at goalkeeper Stephen Henderson. Later, Cameron McGeehan nearly opened the scoring by flicking on Mike Bahre’s left-wing corner but the header was cleared by a defender near the line.

Wycombe got back into the match and the Reds failed to get on the ball much for the next 20 minutes, instead reduced to scrambling clear Wycombe crosses and throughballs in a scrappy period of the match. The hosts thought they should have had a penalty for a push by McGeehan on Alex Samuel on the edge of the box while they failed to test goalkeeper Adam Davies.

Barnsley were better towards the end of the half and almost took the lead when Alex Mowatt’s corner was punched by Henderson to Ethan Pinnock whose header looked to be looping into the top left corner before the goalkeeper impressively clawed it out.

Wycombe should have taken the lead two minutes into the second half but Davies made a sensational save, pushing a close range effort onto the bar after Randel Williams looked certain to score from five yards out after a right-wing cross.

But Davies was beaten by Williams on 55 minutes when the winger’s powerful volley from the edge of the box was palmed into the net by the goalkeeper after a corner was cleared.

The hosts deserved the lead after making an impressive start to the second half and a stunned Barnsley made two changes with Brad Potts replacing Bahre on the right wing and the injured Cauley Woodrow making way for Jordan Williams with Jacob Brown moving from right-back to up front.

Barnsley struggled to create clear opportunities, with the most likely route to goal being corners by Mowatt, who eventually moved to left-back from central midfield after Zeki Fryers went off. They led to several blocked George Moncur shots, a header over the bar by Brown and McGeehan’s weak effort being easily held by the goalkeeper.

Moore scuffed a long-range effort wide in injury-time then, even later, Pinnock – who had been put up front as an emergency striker – met a cross by third substitute Mamadou Thiam unmarked eight yards out but volleyed over the bar.