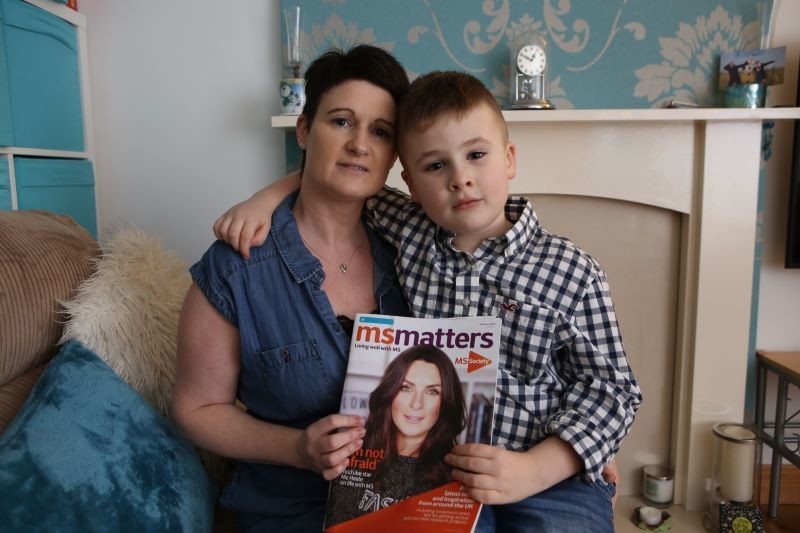 A MOTHER who diagnosed with multiple sclerosis after giving birth to her son is hoping a new treatment can slow down the disease and allow her to enjoy more things with her family.

Claire Burgin was diagnosed with the condition which affects the brain or spinal chord in February 2013.

She had given birth to her son Aaron two years earlier, and said being a new mother was difficult. She has since had to give up her job as a call centre manager, finds certain tasks difficult and gets tired very easily. She can walk, but only short distances.

Claire has also experienced negative comments from people because she doesn’t look ill.

She has set her sights on having a treatment called Haematopoietic Stem Cell Treatment which halts the progression of the disease. But has been told she did not fit the NHS criteria and is raising £50,000 to have the treatment in Mexico.

Claire, 43, of Brampton, said: “When my husband Phil and I were told it was multiple sclerosis, we breathed a sigh of relief that it wasn’t Motor Neurone Disease, which is terminal. Phil squeezed my hand and we looked at each other and said ‘thank God’. “MS isn’t terminal, you just have to learn to live with it. I just thought I wasn’t being a very good mum. I had to work part time and look after my little boy. When we came home, I didn’t know what to do, or what it meant so I started researching it.”

Claire has had to change almost every aspect of her life. She gave up her job and looks after Aaron, who is seven next month, while Phil works.

She has suffered three ‘relapses’ including one where she woke up and had lost feeling in her left side. But she said one of the hardest things she’s endured is negative comments.

“Because I look ok, I find it difficult. I’m allowed to park in the car park at school and although it is a few steps further than parking on the road, it is safer than me trying to cross the road with Aaron and his bags. I could fall, or my hands could stop working.

“I wear a tonne of make up to cover the rosacea on my face which is caused by my tablets. My nose and around my lips are bright red, but no one would know that. It doesn’t go away.”

Before her diagnosis, Claire was told the pain in her hands could be carpal tunnel, and she would need an operation on her back to stop a disc pushing on a nerve.

She underwent the procedure, but still experienced some pain and could not feel anything on her left side when asked by a doctor, who said that was not normal.

She underwent scans and tests, and a lumbar puncture which confirmed it was MS.

Despite being told she doesn’t fit the criteria for the treatment on the NHS, Claire and her family have decided the best thing is to have the treatment in Mexico, which involves a stem cell transplant, chemotherapy, and remaining isolated in Mexico for up to four weeks to avoid infection. Some people have died having the treatment.

She said: “We asked Aaron if he would prefer mummy to be able to walk with him and be able to use my hands, and he just said he wanted me to do it. I think he will be upset when I go, and I will have to hold it in because I might not see him again. It’s hard but Phil has been amazing.”