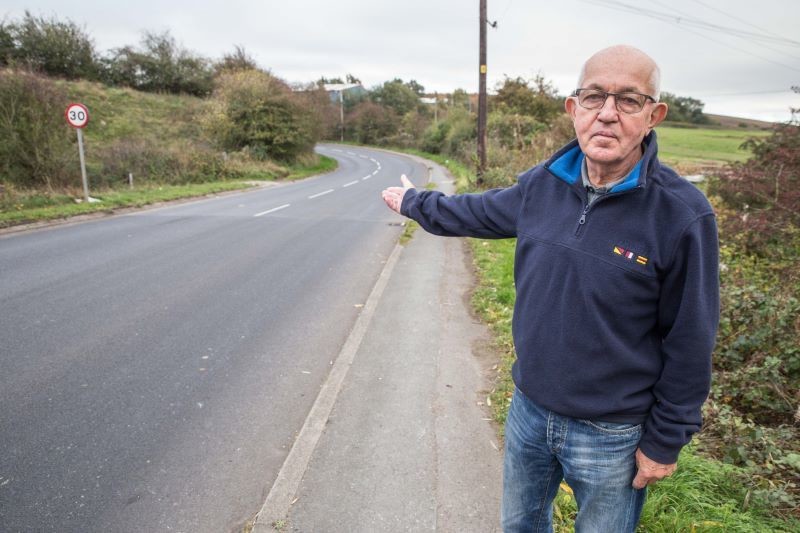 A WARNING for drivers to slow down on a bend which has been the scene of dozens of collisions this year has been issued ahead of the winter period.

Traditionally accidents are more frequent on Sandy Bridge Lane, Shafton, during the colder months and Shafton Parish Council has urged motorists to slow down for the notorious bend following another serious crash last week.

At around 4.30pm last Friday, a vehicle heading away from Shafton lost control on the bend and collided with a tree, according to South Yorkshire Police, who told the Chronicle the driver was taken to hospital with non-life-threatening injuries.

Barnsley Council, which receives funding from the South Yorkshire Local Transport Plan to carry out improvements on roads where there is a history of collisions resulting in injuries, previously said the lane was not on its hotspot list but this year’s data has not yet been signed off by the Department for Transport.

Parish councillors are hoping the findings will show the true extent of the road’s danger - before a fatal accident occurs.

“We’ve had site visits and been in talks with the council’s highways department for a long time,” Dave North, chairman of Shafton Parish Council, said. “But nothing ever seems to come, we don’t qualify for safety measures because there’s been no fatalities.

“To me that doesn’t sit right as we simply cannot wait for that to happen before someone decides to act on multiple warnings. If a serious injury isn’t sustained, it’s not recorded and the data as a result doesn’t paint the true picture.

“We discuss concerns about Sandy Bridge Lane every month and we fear more accidents are around the corner due to the worsening weather.

“It’s had a steady amount of crashes in the spring and summer but there’s always more when the roads are damp, cold and icy - it’s the same every single year.”

Resurfacing work along the stretch was carried out in the spring - to remedy its undulations - but white lines to separate vehicles on the two-way carriageway and promised 30mph road markings which were to be painted to warn drivers of the village’s limit on the road have so far failed to happen.

“The white lines should have been done months ago following the resurfacing scheme but for whatever reason it hasn’t,” Dave added. “We’re not asking for a lot and we’ll carry on until our voices are heard because the problem is important to fix.

“There’s been dozens of incidents there this year already and although the police say it’s down to speed, something which I agree with, the council still have a duty to increase safety and warn people about not only the speed limit but its bend.

“That always catches drivers out and it is often because they are travelling too quickly. The fact that there’s a 30mph road sign in a ditch, six or so months after it was hit by a car, shows everything.”

Barnsley Council is looking into the complaints about unfinished road markings, but said it has ‘limited access’ to an online mapping system which logs crash data.

“The PIC data that we have access to shows that there have been four collisions reported at Sandy Bridge Lane in the vicinity of the bend from January 2015 to December 2017. This year’s data is only provisional until the Department for Transport signs it off.

“All four of the collisions occurred during periods of inclement wet or frosty/icy weather.”

The road - which was also a recent priority for police - has been retained as a location for the Barnsley East Neighbourhood Policing Team’s mobile speed gun after 34 motorists were caught flouting the limit in two separate visits earlier this year.

Dave added: “These motorists weren’t fined but were warned - a message needs to be sent out that drivers will be fined if they exceed the limit.

“If the council isn’t willing to carry out any safety measures, we have to rely on the police to enforce that 30mph limit that’s often being ignored.”